Other
Feedback
Home
Home   COVID-19 treatment studies for Ivermectin  COVID-19 treatment studies for Ivermectin  C19 studies: Ivermectin  Ivermectin   Select treatmentSelect treatmentTreatmentsTreatments
All Studies   Meta Analysis
▶
▶
All Studies   Meta Analysis   Recent:
The FDA-approved drug ivermectin inhibits the replication of SARS-CoV-2 in vitro
Caly et al., Antiviral Research, doi:10.1016/j.antiviral.2020.104787 (In Vitro)
In Vitro study showing that ivermectin is an inhibitor of SARS-CoV-2, with a single addition to Vero-hSLAM cells 2h post infection with SARS-CoV-2 able to effect ~5000-fold reduction in viral RNA at 48h.Some people claim this study shows that therapeutic concentrations cannot be reached in humans, however this is incorrect. The authors explain why using this in vitro study to determine the effective dose in vivo is a fallacy in this presentation [vimeo.com]. Authors indicate that the concentration required is very unlikely to be an issue. The study used monkey kidney cells (the only choice at the time of the experiments), which they note lack adaptive immune responses and do not produce interferon. Authors also note that ivermectin accumulates in lung and other tissues, and that the average lung concentration shown in modeling studies exceeds the effective level in their study. Authors have also repeated experiments with human lung cells showing 6-8 times improved IC50.Author's have also responded noting that "ivermectin's key direct target in mammalian cells is a not a viral component, but a host protein important in intracellular transport; the fact that it is a host-directed agent (HDA) is almost certainly the basis of its broad-spectrum activity against a number of different RNA viruses in vitro. The way a HDA can reduce viral load is by inhibiting a key cellular process that the virus hijacks to enhance infection by suppressing the host antiviral response. Reducing viral load by even a modest amount by using a HDA at low dose early in infection can be the key to enabling the body's immune system to begin to mount the full antiviral response before the infection takes control." Authors note that ivermectin works with the immune system and a 1:1 ratio of drug to virus is unlikely to be required [vimeo.com].In further research, authors note that they find efficacy for prophylactic use, and that smaller repeated doses is more efffective than a single larger dose [vimeo.com].Rajter et al. summarize the author, noting that “the antiviral activities of ivermectin have been derived from laboratory experiments that largely involve high, generally non physiologic, multiplicities of infection, and cell mono layer cultures, often of cell lines such as Vero cells that are not clinically relevant. The EC50 values should not be interpreted beyond the fact that they reveal robust, dose dependent antiviral activity in the cell model system used, and it would be naive to strive for μM concentrations of ivermectin in the clinic based on them.” [sciencedirect.com].15 In Vitro studies support the efficacy of ivermectin [Boschi, Caly, Croci, De Forni, Delandre, Jeffreys, Jitobaom, Jitobaom (B), Li, Liu, Mody, Mountain Valley MD, Segatori, Surnar, Yesilbag].
Important missing comments or errors? Let us know. 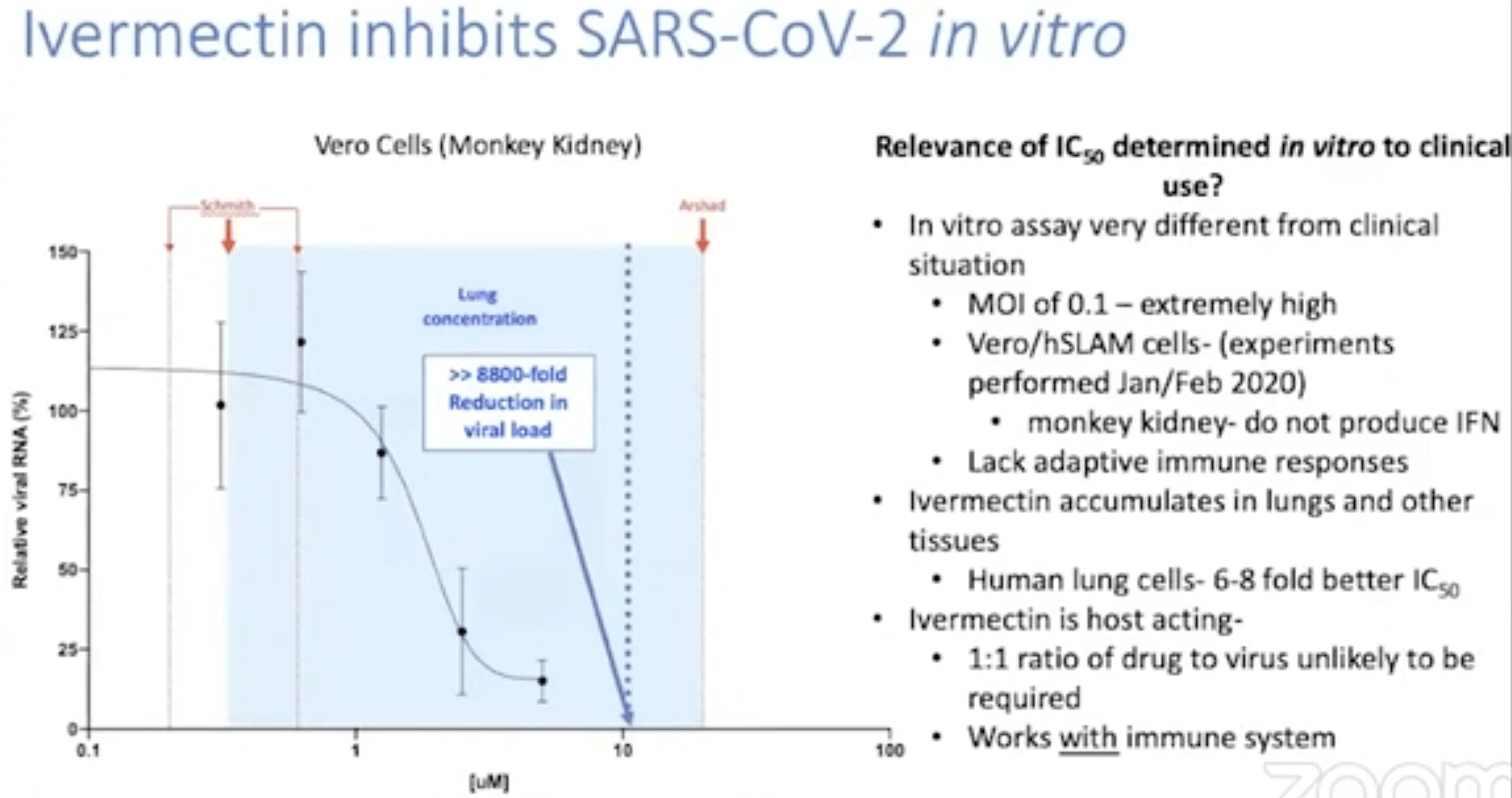